Eight years ago I was having a breakfast of croissants, juice, and coffee with my Mum and Dad and three of my closest friends at the old house Kirby and I used to own. After our breakfast we were going to the hairdresser where my friends and I would have our hair and make-up done.

After that we would come back home and I would put on my beautiful white dress which reminded me of autumn, and my friends would put on their stunning pale green dresses.

Dad and I would then get into a 1957 Bentley and my friends would get into a Royal Daimler Limousine which would take us to the Adelaide Town Hall where Kirby and I would be married in front of our family and friends. 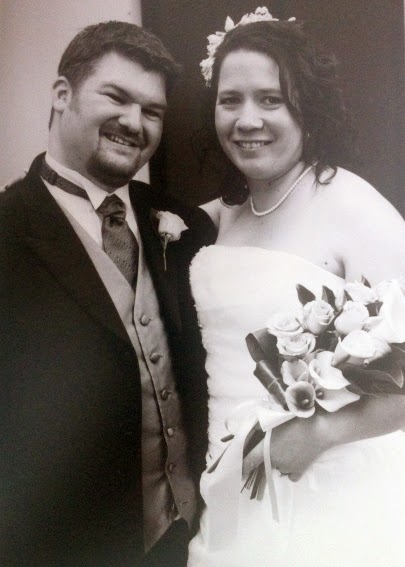 I can’t believe it has been eight years already, but at the same time when I think of everything that has happened it couldn’t possibly be less than eight years because there wouldn’t have been time for it all.

Our anniversary is always a strange kind of day. A celebration mixed with tinges of wistfulness. I love Kirby so much and the 8th of April is a celebration of that love and the day that we committed to each other for exactly who we were and who we were to become. But there are two shades of wistfulness that come about as well, and one of them I’ve only realized exists in the past year or two.

The most obvious source of wistfulness is that if we had been successful with our very first round of IVF our baby would have been due on about the 8th of April 2009. We did not get to the stage of egg collection and there was no embryo transfer, but nevertheless I think about the “what if”. It would have been awesome to be celebrating the fifth birthday of our child as we celebrate the eighth anniversary of our marriage.

The other font of wistfulness, which I have only realized in the past few years, is that our anniversary is cause to look back at a time when we were certain about what our lives would be like today.

We were sure that by now we would have children, that we would still be in our old house and have renovated it, and that we would both have satisfying careers (I thought at the time that I could be working in human resources) which would also give us a work/life balance for our kids. We saw family holidays, children’s birthday parties, kindergarten, mess, finger paintings on the fridge, little tiny beds and teddy bears, and toys everywhere.

We really had a fairy tale romance during those first two years. After so much time searching we had found each other. We bought a house together within three months, were engaged two months after that, and we were married within eighteen months of meeting each other. Our families got along so well, and I felt I belonged with Kirby’s friends immediately, as did he with mine.

Why would we even dream, when everything was so amazing and we knew we were soul mates, that we wouldn’t be able to have children?

Yet, here we are. Eight years later and we don’t have the children and the life we thought we would have.
We are happy with our lot. We have an honest, trusting, and loving relationship. We have wonderfully supportive family and friends. We have new dreams and plans. We have our crazy fur and fin kids. We have our nephews and nieces. We have our friends’ children. We have a lovely home, live in a beautiful area, and we have food on the table. Life, compared with those of so many, is good.

Still, I think it is okay to feel happy for our anniversary and wistful for our children every year on the 8th of April.

I will be writing two more blog entries this week as there are two other topics I want to talk about. One will be about dates and the other will be about stars.

Before I end this blog entry I want to share something beautiful that happened in this past week. My friend was over with her three year old daughter. Out of nowhere the little girl threw her arms around my neck and said “I love you”. This is what makes life good.

Posted by Kate Bettison at 6:51 PM

Happy anniversary! April 8 was the day of my BFP 5 years ago, and my Dad's birthday. It is truly a bitter sweet day but enjoy it! LOVE seeing the photos of your wedding day!!! Beautiful!

Thank you! It is a bitter sweet time - that is for sure - but more sweet than bitter these days...and watching our DVD of our wedding today brought about so many laughs and smiles!