Did that get your attention?

About eight years ago Kirby and I bought four tiny little fish home to put in our pond – we named them Katherine (grey fish), Humphrey (multi coloured), Ginger (orange and white) and Fred (pure orange). They were gorgeous, friendly and actually came when they were called – I’m not sure what the neighbours thought hearing me say “fish, fish” in a high pitched voice! 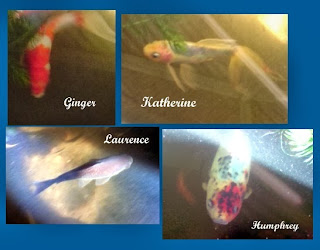 A year later my parents-in-law moved house and brought down a gorgeous black fish to join our fish and he settled in nicely. We named him Laurence. Yes there was a theme back then – Katherine Hepburn, Humphrey Bogart, Ginger Rogers, Fred Astaire, and now Laurence Olivier. 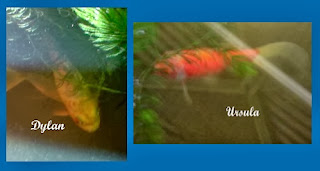 I was feeding the fish, just over a year after Laurence came to live with us, and I thought I saw some tiny little creatures flitting from one pond plant to another. At first I thought they were mosquito larvae, but I watched them closely and realised they were baby fish! This was the first generation of babies.

We now had a gorgeous grey fellow who we named Dylan and a pretty orange fish we called Ursula. This time we had the theme of writers and poets to name the fish – Dylan Thomas and Ursula Le Guin.

In the following years we have had four more generations of babies. Sadly some of them didn’t make it past the first year or two and the first five fish we had have also passed away.

When we moved house I was not going to leave my fish behind. We took a new pond to my parents’ house and set it up and then took the fish down there. When we were all settled in our new house we brought the pond and the fish home and they are very happy here.

While we were getting the fish out of the pond at my Mum and Dad’s we discovered two more babies that we didn’t know were there.

So, now in our pond we have Dylan, Ursula, Sydney, George, Flynn, Harriett, Holly, Maisie, Scarlett, Harry, Milly, Mika and Charlie (there’s no logical theme to naming them anymore...except Holly is named after Holly Shiftwell from Cars 2). They are all as friendly as the fish before them were – I guess they learnt that I was okay and was the bearer of food from the generations before them.

A few weeks back I was sitting by the pond watching the fish and I noticed that George was looking particularly chubby, as were some of the others. They were carrying eggs!

The other day their chubbiness had diminished and all the fish were chasing each other around the pond…safe to say I can expect more babies in the next few weeks…yay! They will be born in about 7-10 days, but I won’t be able to see them for some time after that because they are so small.

I’m really excited and I am already thinking about names, and wondering who they will look like – for example, Dylan has to be Katherine’s descendant, and there is a distinct look of Humphrey in Holly.

I’ll let you know when the babies appear!
Posted by Kate Bettison at 4:34 PM No comments:

For the next two weeks…

I will be on a break from writing entries for “When You Can’t Have Kids” for the next two weeks due to some editing work I am doing that will be taking up most of my time for a little bit. When you see the photo below of me that shows what I’m like after editing for about eight hours I'm sure you will forgive me…

Posted by Kate Bettison at 11:14 PM No comments:

I wanted to talk briefly about last week’s post “What kind of mother…”.

Sometimes in my posts, like last week, I can sound incredibly harsh on myself and sometimes I wonder whether I should share such dark emotions and self-judgment on “When You Can’t Have Kids.” I don’t want people to think I am a negative person or that these types of thoughts and emotions are a significant part of my life.

So, why do I talk about the darker side of me?

I decided when I started “When You Can’t Have Kids” that I would be very honest with you all as to the experiences I have. This includes the good times, but it must also include the not so good. It must include those experiences that hurt, are frustrating and are hard to admit to. Like everyone, I’d rather people think I have it all together, that I am happy all the time and that I have brilliant self-esteem. But, I don’t.

I am mostly a happy and positive person and I love my imperfect life, but sometimes that dark little voice that says “You are terrible, you are not good enough” pops up in my mind and heart.

I want this blog to help people who are in a similar situation to me. It’s true that no two people have exactly the same experiences, but I am sure that everyone has times where those dark emotions call by for a while. If I share mine, then I hope it will help other people to realise that these emotions are normal – they are nothing to be ashamed of. We are all human and that means we have low times. Let me say that again – we ALL have low times.

I do – and I want you to remember that when you do, I am here thinking of you, understanding as much as I can without being you, and sending you a great, big universal hug.

Lastly, I want to thank Milly and Robin Mary for their comments on last week’s post – your support for me means the world. And it makes me realise that while I want to be there for others, others are there for me too – and that touches my heart more than you know.
Posted by Kate Bettison at 3:43 PM No comments:

What kind of mother...

I wasn’t planning to write about what I will write about this week, because I didn’t know about it until this morning. I had no idea. Well, that’s not true – I must have known at some stage, but somehow it slipped away and I lost it. And now I’m wondering what kind of mother I really would have been.

Last week I found my journal that I began when we first started IVF. I read the words of the first entry and I wished I could go back and give that naïve girl who thought everything was going to work out a hug of strength for the years to come.

I read a few of the other entries and then I looked at the dates. The first entry was dated the 10th July 2008 – the beginning of our first cycle of IVF, which ended up being cancelled.

What kind of mother does that? I can’t have children and I can’t even get the dates of what would have been their births right. I feel sick to the stomach when I think about it. I feel so angry at myself.

I don’t even know what to write in here right now. Except to say to my children – I am so, so very sorry.
Posted by Kate Bettison at 5:31 PM 3 comments: