I went to see my doctor not long after my last blog entry. And my apologies for the time between entries! I’ve a couple of big projects to do and I haven’t been feeling too brilliant – although much better now.

I won’t go into all of it, but she basically validated what I was feeling – which was very important as I now realise. To have someone who doesn’t have a personal link to me (as family and friends do) say that my thoughts and feelings are rational was so comforting – I’m not crazy! At least not on this issue…

I wrote the letter about a week after seeing my doctor. It was really therapeutic. I started off with my incredibly angry words, and then through the letter ended up claiming myself and my healing back.

I have decided to share the letter with you as it shows the thought process that I went through while writing it – from unbelievable anger at the clinic to claiming my own self again. I have blacked some of the letter out due to the words not being necessarily appropriate! 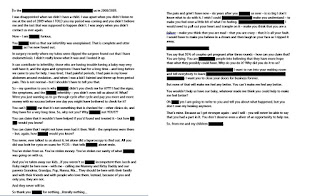 I will still be writing to the IVF clinic formally and seeing a counsellor, but writing this letter now has been an important and valuable first step in working through these messy emotions.

Posted by Kate Bettison at 3:14 PM No comments:

I’ve been busy this past week, and I’ve actually enjoyed myself quite a lot – even though most of what I’ve been doing has been housework! It’s amazing what a good music soundtrack can do to make housework more tolerable! Although when I’m dancing around the kitchen with a broom my cat, Frankie, tends to hiss at me – I guess she’s not a fan of my moves…

Kirby and I went to the Adelaide Clipsal V8 Supercars on Saturday and that was awesome. We watched the race and wandered around looking at all the displays of old cars, and new cars (the type that we would never be able to afford!), and taking in the atmosphere. It was very hot! 38 degrees Celsius (around 37 degrees Celsius equals 100 degrees Fahrenheit). But it was great.

So things are going well, except I have a sense of feeling stuck in some areas of my life – particularly in regards to my writing. I want to write, I know what I want to write, but somehow, when I think about it, my anxiety rises. It’s almost like I don’t deserve it…or maybe I’m worried that I will fail at it…I’m not sure.

I’m having a lot of dreams about babies and the other day I said to Kirby that the baby I lost in 1998 (six years before I met Kirby) would have been eighteen this year. I actually said “Hayley would have been eighteen this year.” I’d never called that baby anything…so I don’t know why I’ve called her Hayley now. It was a very early miscarriage and it wasn’t confirmed at all, so there is a chance there was never any baby, but I do believe I was pregnant as my period was three weeks late and was very heavy when it came, and normally, at that time, my cycle was like clockwork.

I’ve still been crying and feeling upset about the whole endometriosis thing and finding myself thinking about that a lot. That’s happening less and less though.

I’m doing okay with the regular, every day things, but I feel as though there is a block which I am stuck behind that is stopping me from getting on with the other things – the things that make me who I really am.

So, I’m going to go see a counsellor.

I’ve gone from being so confused and sad that I know I need to see one, to feeling really good and thinking I don’t really need to see one. To be honest, I’d rather not go. I want to be able to work through all this on my own with the support of my family and friends. But, I can’t.

My family and f
riends are there without a doubt and they can talk to me, support me, and provide endless hugs, but I need to talk to someone who is independent, can assist me in viewing things differently, and can guide me toward regaining my motivation (or perhaps it’s more to do with overcoming anxiety or feeling I deserve to follow some of my dreams regardless of whether I succeed or not).

It’ll be interesting. I’ve seen one counsellor before, but I’m not certain if I should see her again, or whether it would be useful to see someone different for a different perspective. I’ve got three days to think about it!

It will be an interesting journey I’m sure.
Posted by Kate Bettison at 5:37 PM 2 comments: