We took the eleven year old daughter of our friends out on Saturday. We went on a dolphin cruise on the Port River in Adelaide and we even saw four dolphins! We were the only ones to see one of the dolphins which was pretty special!

Jess knew that Ari had died and in the car on the way to the Port she said about how sad she was that Ari was gone and how it must be really hard for us.

Okay – I’ve got tears in my eyes right now.

This beautiful, amazing girl said so simply and honestly exactly how we felt about our Ari. He was our child.

She showed more understanding than many adults would and with such simplicity and honesty.

We adore her so much – she is a pure delight in our lives – and I know for sure she is an old soul.

We love you Jess!


Posted by Kate Bettison at 6:01 PM No comments:

Earlier this year I was considering going for counselling after my operation in January. This was due to the surgeon finding endometriosis, which very likely could have contributed to my infertility but was something the IVF clinic we went to never looked into, let alone mentioned. I was feeling very angry and let down and the grief about not having children reared up violently.

I haven’t gone to counselling.

This time I found, after a bit of time, I didn’t feel that I needed it. I found that I have moved through the grief and pain (although it did rise again after my last operation in June) and have come to a point where the anger is not overwhelming and I no longer feel guilty that I let our children down.

I used to be a positivity nut – and when things weren’t going my way or I thought they were unfair I would try to control everything to make the situation good again, or I would look for a very good reason as to why things weren’t going my way. I didn’t recognise back then that what I wanted was for things to go my way – I just thought that because I was thinking positively about certain aspects of life that they would happen the way I envisaged.

My mother-in-law said to me the other day that there is something different about me this year – that I seem more settled in myself. And that is how I feel.

Life has its ups and its downs – I have very little control over it really. I do what I can do and then the rest happens due to events, people – a combination of things really.

I have learnt to accept that – most of the time! The night before Ari died, when he was in the emergency vet overnight and we knew he was very sick, I said to Kirby that it was quite possible that Ari might not come home. Kirby was surprised, I think, as normally I wouldn’t even want to entertain that idea. But, it was a real possibility, even though I hoped that what was wrong with him would be something like a blockage in his digestive system that an operation could fix.

I don’t believe that my “negativity” contributed to the outcome. How could it? Ari already had lung cancer and was going to die. I didn’t create it overnight and change what was wrong with him from something that could have been fixed to cancer. If I had the kind of power to change situations there is so much I would change in the world and I would be a god! And, Ari would still be here because I would definitely have made it so.

So, I’m not sitting here with my thoughts and emotions constantly wondering why it all happened and how unfair it all is and that life is over. Of course, I am grieving – which involves feeling sad, angry, guilty, asking why, etc. but it is a healthy grieving, not an unhealthy grieving. I hope that makes sense.

Stoicism is something I have been reading about lately – once again thanks to Oliver Burkeman! Being stoic – as it is defined today – was not what it originally was. Stoicism is a philosophy and one I am keen to learn more about. One of my favourite quotes from Marcus Aurelius (2nd century AD) is:

“The cucumber is bitter? Put it down. There are brambles in the path? Step to one side. That is enough without also asking: “How did these things come into the world at all?””

I’ve still got a long way to go in understanding Stoicism, but it seems to be a philosophy that quite possibly will appeal to me the more I delve into it. Or maybe it won’t be. I don’t know and that’s quite okay.

So, with the endometriosis and with Ari and with not having children – I can grieve in a healthy way, and wonder why as part of that grieving, but that is it. I don’t have to keep on asking why and constantly dwell on it and be angry all the time.

The interesting thing about Stoicism is that the recognition of a situation doesn’t mean that you don’t do anything about it – if someone is bullying you, you wouldn’t sit there and say “well this is how it is” and leave it at that. You would say “this is how it is – now I recognise this and I will do something about it.” Perhaps it is in that recognition of the situation that the clarity of whether there is anything that needs to be done occurs, and if so, what that might be? What do you think?

Therefore, I will still be writing to the IVF clinic to ask for an explanation about why they didn’t look into endometriosis – because I believe this will be a healthy thing for me to do and may prevent them from failing someone else in the future as they did us. After that, whether I get a satisfactory answer or not is out of my control, and I will leave it be.
Posted by Kate Bettison at 4:06 PM 3 comments:

After last week’s sad entry I thought I would share with you a video to make you smile.

I was really worried after Ari died that our other dog, Odi, would fret quite badly. But, while he’s been a bit confused and looking for Ari, we’ve had him inside more and he is proving quite the well-behaved indoor dog!

My Mum and Dad bought him a new toy “Giggle” as well, which he absolutely loves. Toys and presents are Odi’s absolutely favourite things! He even tries to take presents that are given to Kirby and me…if he can get to them first!!

So, here is a video of Odi playing with Giggle…

Email ThisBlogThis!Share to TwitterShare to FacebookShare to Pinterest
Labels: pets 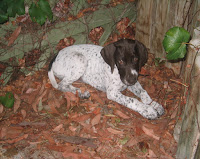 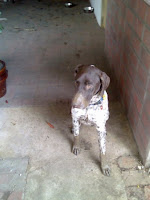