A Piece of Heaven...

On Saturday my Mum and Dad, Kirby and I, our nephew, Hugo, and our friends’ eight year old daughter, Jess, went to the Beach House. The Beach House is a two storey building by the seashore with waterslides, a carousel, a little train, mini golf, bumper boats and much more.

Mum and Dad had decided that instead of giving Hugo a gift for his third birthday they would take him there – and then Kirby and I were included and then Jess, who Hugo adores, was invited too.

It was a magic day. The kids thoroughly enjoyed themselves at the Beach House and afterwards flying a kite on the beach.  Although I’m not sure who enjoyed the kite the most – the kids or Dad!

When Kirby and I realised that we weren’t going to have children one of the things that hurt most was that we were not going to be giving Mum and Dad grandchildren that they would be able to live close to. My nieces live in another state – a two hour flight or a three day drive away – so Mum and Dad only get to see them a few times a year. I was looking forward to Mum and Dad being able to have grandchildren nearby.

But, perhaps it is that very hurt that has made Saturday so very special and precious. For a day we had a glimpse of what it might have been like if we’d had children. Kirby and I looked like every other couple who were there with their children and parents – nobody who didn’t know us would have thought twice about whether Hugo and Jess were our children or whether Mum and Dad were the doting grandparents.

The best bit, though, is that even though Jess and Hugo are not our children, they love us and we love them so very much. We get to spend time with them and every minute is precious. And Mum and Dad love them too.

Sometimes it’s hard not to have what other people have, but when we get a little piece of heaven like we did on Saturday, it is such a beautiful thing.
Posted by Kate Bettison at 11:42 PM No comments:

Find Me Somebody to Blame...

A few weeks ago I contacted the IVF clinic we went to between 2007 and 2010 to obtain a copy of my clinical notes as I am having some investigations soon related to another health issue, and I was wondering if the two could be linked.

The clinic sent the notes to me within a week. I had a flick through them and became absolutely furious. The notes were wrong. They recorded that we had four IVF cycles, but we only had three. They also mentioned blood tests that were taken in late July 2009 when I was in New York. There was also no mention of the test that we tried to have to see if my eggs were any good. I couldn’t believe that they had got my notes so wrong, and it made me wonder just what else they had got wrong. Perhaps those zygotes (I hate that word…) that they got rid of because they were poor quality were actually okay.

I was going to contact the clinic and they were going to have some explaining to do, but I decided to leave it for a few days so that I could contact them with a calm state of mind.

A few days later I looked through the notes to get my facts straight – and I came away feeling very bewildered. There were only three cycles mentioned, and I couldn’t find the reference to any blood test being taken at the end of July 2009. I had misread the notes when I first got them.

Every now and then I want someone to explain to me why Kirby and I can’t have a child. I want someone to take responsibility, or I want to find proof that someone made a mistake. I guess it’s like that for everyone who has had something happen in their lives that just doesn’t make sense and doesn’t seem fair.

I realise that even before I started reading the notes I was on the defensive – I wanted to find something that would explain it all. I saw mistakes in the notes that weren’t there because I wanted there to be a reason and this time I almost wanted the clinic to have made a mistake. I wanted to be able to say “There – that’s why it didn’t work and it’s their fault.”

The truth is we will probably never know why we can’t have a child. There was never anything found in all the tests that could explain it.

I know life doesn’t happen the way we think it will for any of us. Nobody is guaranteed anything for trying to be a good person, and good things happen for those who do not appreciate them – my life didn’t come with a guarantee that it would play out I hoped it would.

I know this. And most of the time I accept it and look to the many positives that are in my life and enjoy what I do have. But sometimes I wish there was somebody to blame…somebody to blame so I don’t feel the need to blame myself.
Posted by Kate Bettison at 12:54 AM No comments:

In 2003, about a year before I met Kirby, I had a very special dream about my Grandma – my Dad’s Mum. I dreamt I was in a long hallway and she was standing at one end and me at the other. Between us was a little girl who looked about two years old, who was toddling towards me. Grandma looked at me and said “This is Ruby – you will look after her now.”

I met Kirby in October 2004, and not long after we met I told him about the dream. We had already talked about having children, and he thought that Ruby would be the perfect name for a daughter if we had one. Kirby even bought me a necklace with a ruby stone for our first Christmas together.

Not long into our relationship I found out that Kirby’s Grandma, his Mum’s Mum, was called Grace. It was just right for the second name for our Ruby. Ruby Grace – it sounded beautiful.

We never had our Ruby Grace, or our Jacob Arthur either (Arthur after my Dad).

I have eleven cousins, and one of them is Joshua. It often seems strange to me that he is a well and truly grown up man now – I used to change his nappy and bath him when he was a little baby! Although I suppose I was only ten when he was born. I haven’t seen Josh for quite a few years.

A few days ago Josh and his partner, Dale, had their first child. They had a little girl, and they called her Ruby Grace. Out of the millions of names they could have chosen, they chose the exact name that we were going to call our daughter if she had turned up. Joshua and I have never spoken about names, and he had no idea about our intentions.

I have seen a photo of Ruby Grace and will be going down to visit Josh, Dale and Ruby in the next few weeks. She is beautiful – as you can see from the photo below.

Little Ruby has already made a wonderful difference in my life, as she will be the reason that I will see Josh again – I have missed him and can’t wait to see him because of who he is, as well as for his daughter and Dale of course.

I’ll admit that when I found out Josh and Dale had called their daughter Ruby Grace a part of my heart hurt a bit. It didn’t last long and now you couldn’t wipe the smile off my face if you tried!

It would have been wonderful if there were two Ruby Graces in our family – I’m sure our Ruby would have led baby Ruby astray…but, having Josh and Dale’s Ruby Grace arrive this week is incredible and she has made the world a more beautiful place.

I’ll definitely do a blog entry after I meet her for the first time.

Ruby Grace – how awesome is that? 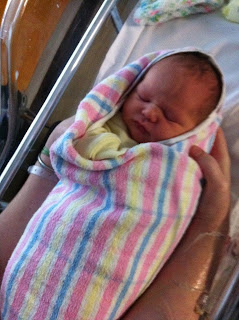 The older I get the more I realise that childhood is very, very short. In the last month the daughter of one of my friends turned eight, the daughter of another friend turned ten, and my niece will turn twelve at the end of the year. Even our little nephew will be three two days’ time.

On the weekend I got to see what sharing special things with our own children might have been like. I remember the first time I saw Amelia. She was only a few days old and I fell in love. Already it was easy to see that her hair would be auburn. She had lovely chubby cheeks that I just wanted to cover with smooches.

Over the past ten years I have watched her grow from a baby, to a toddler, to a young child, and now to the beginnings of a young lady. She is intelligent, funny, kind, and I adore her. I don’t want it to go too fast, but I am going to love watching her grow into a woman and become the amazing adult I know she will be.

For her tenth birthday I decided to throw her a high tea – just for her Mum, Amelia and me. We had a little cupcakes and cucumber and cheese sandwiches. And, I put on the DVD of “Singing in the Rain”. It was so lovely. Amelia loved the dancing and singing.

Just before Amelia and her Mum were going to go home I gave Amelia her present, which was a copy of the DVD. Her face lit up and her first question was “How did you do that?” I told her that I had a copy of the movie and I wanted her to have one too.

This was a very special day. I got to share something I loved with one of the beautiful children in my life – something I had hoped to share with our children. No – it’s not the same as if we had our own, but it’s pretty awesome nonetheless. I love the children in our lives and I hope they always know how special they are to me.
Posted by Kate Bettison at 11:07 PM 2 comments: