The sadness continued after my last entry as on the following weekend the last of the four babies I bought in recent months, Clancy, died. This left little Angel alone and quite despondent. I know that fish used to be thought of as quite brainless – but research is showing that they do have emotions and form types of friendships with other fish.

So, poor little Angel (who is normally quite outgoing) was hiding behind the rock in the pond, barely eating, and not coming out to see me when I called to him.

I couldn’t leave him all on his own and so I cleaned the pond thoroughly to make sure there were no remnants of whatever it was that made Clancy, Dickon, Ned, and Loki so sick – this even included wiping over the water snails so that there was as little algae as possible on them. Kirby and I then went to a pet shop (NOT the one I went to before!) to get three new babies.

I couldn’t decide between three different types, so I got one of each – an orange comet, a yellow comet, and a calico fantail.  After the staff member put the three fish into a bag for me to take them home I asked her if the fish all spoke the same language – you know, because they are different types. It took a moment for her to realise I was joking!

The babies have settled into the pond nicely. As soon as I put the bag in the pond Angel was out from hiding, doing crazy swims around the pond, coming up and looking through the plastic bag at the newcomers, doing another crazy swim, then peeking into the bag again, and so forth. Needless to say he is a happy little fish now with his new friends.

I named the yellow fish Uthai (which is Thai for rising sun), the calico fish Dana (which is Irish Gaelic for cheeky – which suits her well), and the orange fish Jupiter – just because it’s a cool name.

I won’t forget the other fish I had – and these new fish don’t replace them in my heart – I still love Clancy, Ned, Dickon, and Loki. But, there isn’t a quota on the love we can feel and so I can easily love my new babies as well as, and not instead of.

Posted by Kate Bettison at 4:40 PM No comments:

I haven’t written a blog entry in the past few weeks as I have been too tired and too sad to do so.

It began about a month ago with the death of one of the four baby fish I bought to add to my small pond. I only had Ned for about a week and he just didn’t do well and eventually passed away. This was soon followed by the death of Loki (another baby) late last month due to mouth rot, and then Dickon, Saturday week ago, from rot around his tail. I tried everything I could to save them – putting them in a separating tank in the pond, antibiotics, water changes…nothing worked.

Then, on the 26th October the gorgeous Naamfon, an elephant who arrived after I went to Boon Lott’sElephant Sanctuary in May 2014 and who I was looking forward to meeting, died.

Then last week, it was 23 years on the 4th November since my cousin Ben died in a motor cycle accident. He was only 21 years old, and the older I get the more I realise just how young he was.

Also on the 4th November I found out about the further tragedies that had befallen BLES the day before. The beautiful bull, Somai, had died, and three of the dogs, Peanut Butter, Marmite, and Hugh (all of whom I spent many happy hours with at BLES) had been poisoned and had died as well – all on the same day.

Then, on the 5th November I found my beautiful fish, Harriet, ill in the big pond. Harriet was about eight years old, but always a little delicate thing. She died on Friday morning.

On Saturday, after I buried Harriet wrapped in a tissue, with a bit of plant from the pond, and two bits of food to take with her, I wept and I felt so empty.

So much loss. It was, and is, still so much to take in. I expect to see my babies in their ponds swimming happily along and coming up to me looking for food. I never imagined going back to BLES and not having Marmite, Peanut Butter, and Hugh escorting me around the place and coming on walks with the elephants. I never pictured Somai not walking sedately and regally along the track with his beloved mahout Phi Sot. And I always expected to meet Naamfon.

I’m sorry – I can’t write anymore just at the moment…my heart is broken. 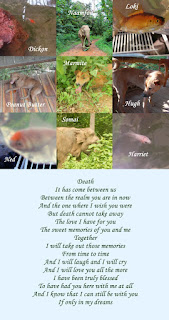